An association and an organisation at the service of the event

The great event of the centennial of the 1917 American landing is organized jointly by THE BRIDGE 2017 association, presided over by Patrick Boissier, and the VILLETÉ PROFILE GRAND LARGE company, headed by Damien Grimont. A complementary and cross-disciplinary team that has made the impossible possible, notably by chartering the Queen Mary 2. A first! 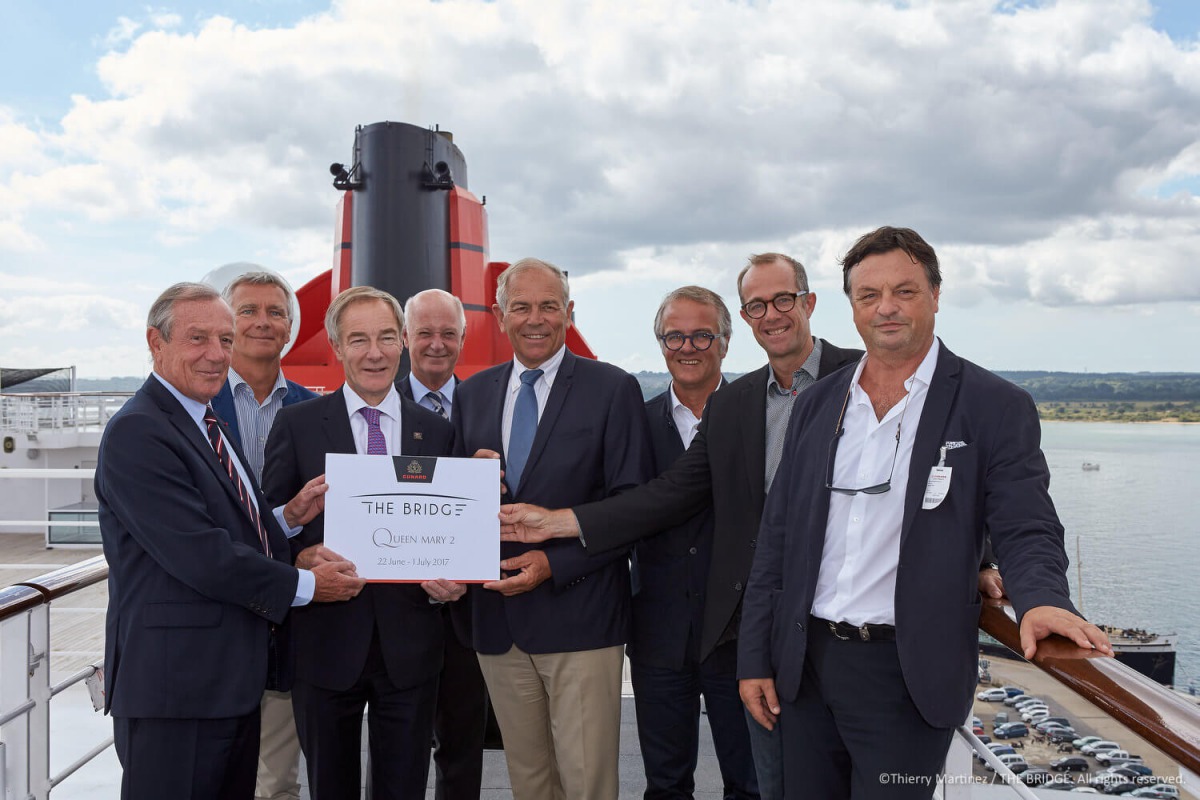 THE BRIDGE, a non-profit association (‘1901’ in France) was created in June 2014 to lead the project and bring together all the participants and public and private partners working towards the success of the event.

Patrick Boissier, President: « It’s an honour for me to participate in THE BRIDGE. Every step taken and each step forward - from the agreement reached with Cunard to the commitment of many participants from Grand Ouest, through all the major events now put in place - has been hugely satisfying. Since the first day, this project, exceptional from start to finish, has been steadily growing on all fronts: sporting, cultural, historical and of course human, while cooperation multiplies under the auspices of Profil Grand Large. The celebration of the centenary of the arrival of American troops will be magical! »

Francis Vallat, Vice President: « The maritime world is right about the exceptional importance and influence of THE BRIDGE. From the beginning, sailors wanted to believe in it, dreaming that this crazy project could come true. It is in homage to those "boys" who crossed the Atlantic to fight with us in our struggle for liberty, but also to unfurl an adventure with its heart in the sea. It is for this reason that almost all the maritime institutions of France have shown their support from the start, followed by the local authorities, and also, the decisive support of all the key players in the business world. »

Yves Gillet, Treasurer: « To participate in THE BRIDGE is to commemorate a major happening in our history. It is also a tremendous opportunity to develop the assets of our region and to project ourselves in the years to come. The ability to work together, whether public or private, cultural, sporting or economic, with a common set of values, gives power and legitimacy to THE BRIDGE project. Sharing emotional moments, developing synergies and thinking about the companies of tomorrow is our ambition! »

Jean-Marie Biette, Secretary: « The image will definitely go around the world: the Queen Mary 2 sailing side by side with the biggest and fastest multihulls, under the bridge of Saint-Nazaire, close by the Nazirian shipyards where she was born in 2003. In terms of the media, the event has undoubtedly got enormous potential. I can already imagine the banks of the Loire crammed with people ... In Nantes and on the Nazarene quays, jazz and basketball will disembark, as they did in 1917, to celebrate the centenary of the arrival of the American soldiers. All around, there will be great concerts and with the 3X3 World Cup sponsored by Tony Parker, the party promises to be really incredible! »

PROFIL GRAND LARGE, creator of events rich in meaning, is a key player in the world of offshore racing. The company based in Vannes, Morbihan, is made up of a team with multiple talents: project managers, salespeople, communicators, administrators, all able to design composite events, public, generators of dreams, meetings and solidarity, similar to THE BRIDGE 2017.

SAILING AS A TOOL TO BREAK DOWN BARRIERS AND INNOVATE

As a major player in the world of offshore racing, Profil Grand Large brings together public institutions, companies, associations, colleges and lycées, as well as the general public, around collaborative events and sports, combining innovative artistic projects, ideas for solidarity, and High-tech challenges, such as the RECORD SNSM, a communications platform for sea rescuers, and LA SOLIDAIRE DU CHOCOLAT, a transatlantic collaboration between France and Mexico.